Right before the election, I’d started a new job at WeddingWire, and in the first few weeks, I was in that weird new-job limbo where nothing could really be assigned to me, so I kept myself busy trying to learn React and Redux in the office. I’m a great employee, you guys.

I also took a trip to Pennsylvania to knock on some doors. When we canvass, we don’t just ask you if you’re going to vote. We ask you what time you’re voting, where you’re gonna go, what you’re gonna wear, what you’re gonna eat that day, and how many states you’re voting in. (Note to Donald Trump: This is a joke. Voter fraud is not a thing that happens. Also, while you’re here, please stop everything you’re doing.)

We don’t really care about the answers, but if you tell me “I know I have to go to the elementary school and I’m going to walk there before work”, you’re much more likely to actually do it, because you’ve mentally planned out how you’re going to fit it into your schedule. Hopefully everyone intends to vote, but I intend to do my laundry tonight and I know damn well it isn’t going to happen because I haven’t actually mentally committed to it yet.

So with a combination of spare time and nervous energy, I made a little site called “Holy Fuck The Election Is Tomorrow”, which was an attempt to canvass virtually. I asked the same questions – Where are you voting? Do you know what ID you need in your state? Do you know how you’re getting to your polling place? Should peas ever go in guacamole? – and linked to relevant resources. If people had their shit squared away (which I imagine most of my twitter followers would, given that we’re a fairly politically active crowd), I sent them to the online phonebank on Hillary’s campaign website. 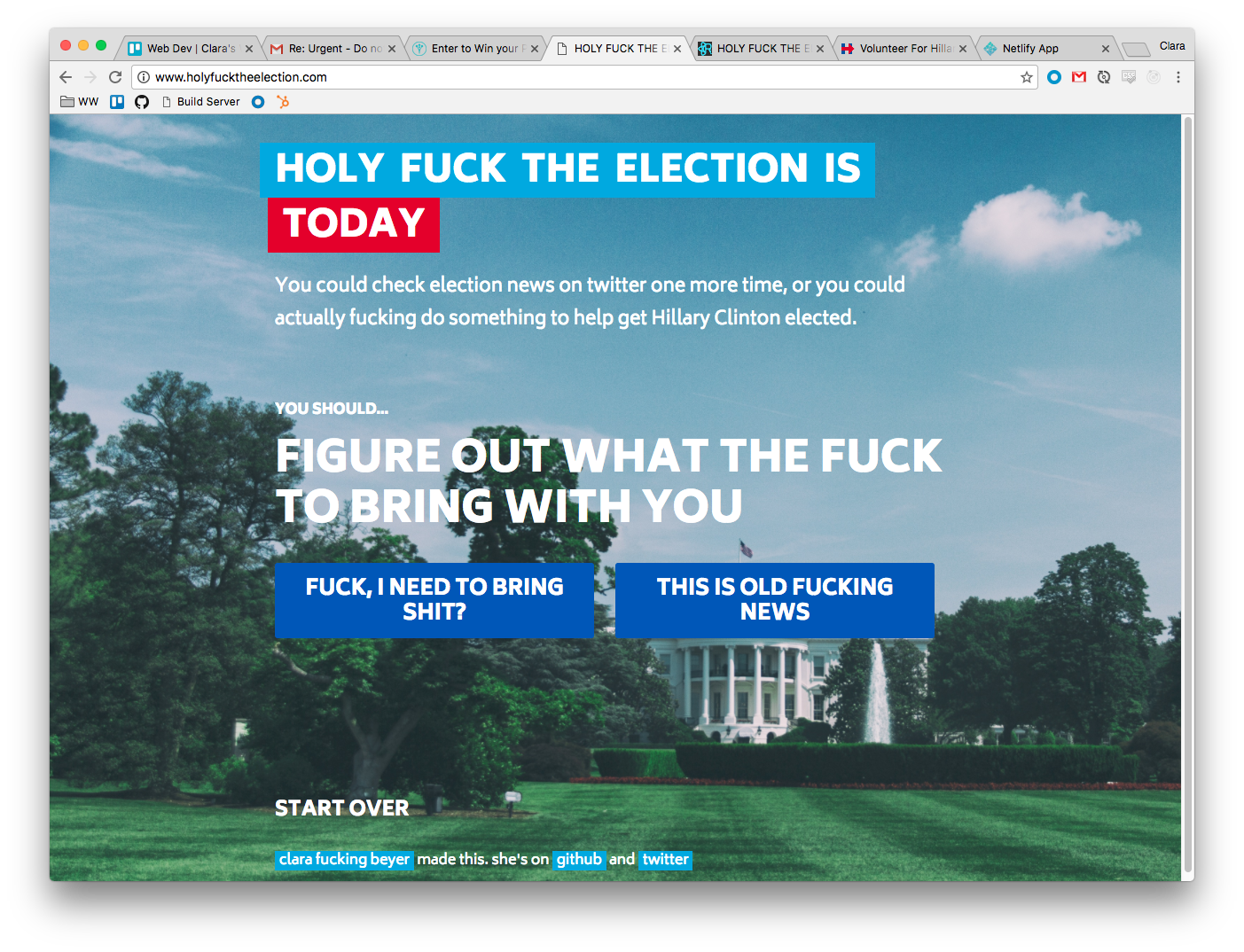 And then the apocalypse literally happened. (Let me just say, I am not even a little bit okay about it, and relatively few of my basic rights are likely to get violated.)

The first day, I did not think about my little website. I mostly cried on the Metro. The great thing about living in DC is that when you cry on the Metro after Donald Trump gets elected, nobody thinks twice. It’s not like New York, where pretty much nothing can phase the average subway rider, but instead a comraderie of “Sure, I was crying at work earlier and I’ll also cry again at the grocery store, so you do you, crying Metro girl.”

But the day after that, I started to see a handful of good things happen. Everyone I knew was trying to figure out how they could help. There were articles and Google Docs and lists of representatives to call and nineteen year old interns to shout at. (This is also a joke. Be nice to the interns on the phone. They aren’t really allowed to hang up on you).

There’s a very DC impulse that I wanted to resist. We get caught up in a sort of nonprofit Not-Invented-Here syndrome, where we ignore the fact that maybe we aren’t the first people to have the idea to bring “common sense” and “real conversations” to the federal government – when we should be throwing our time and money at the people who have been saving our asses from tyranny for the last hundred years or so. Maybe I’m just jaded. Or an establishment hack. It’s actually pretty likely that I’m an establishment hack. I’m definitely a beltway insider.

Anyway. In the spirit of directing resources towards the people who know what to do with them (i.e. not me), I took another look at holyfucktheelection.com. And that’s how it became this: 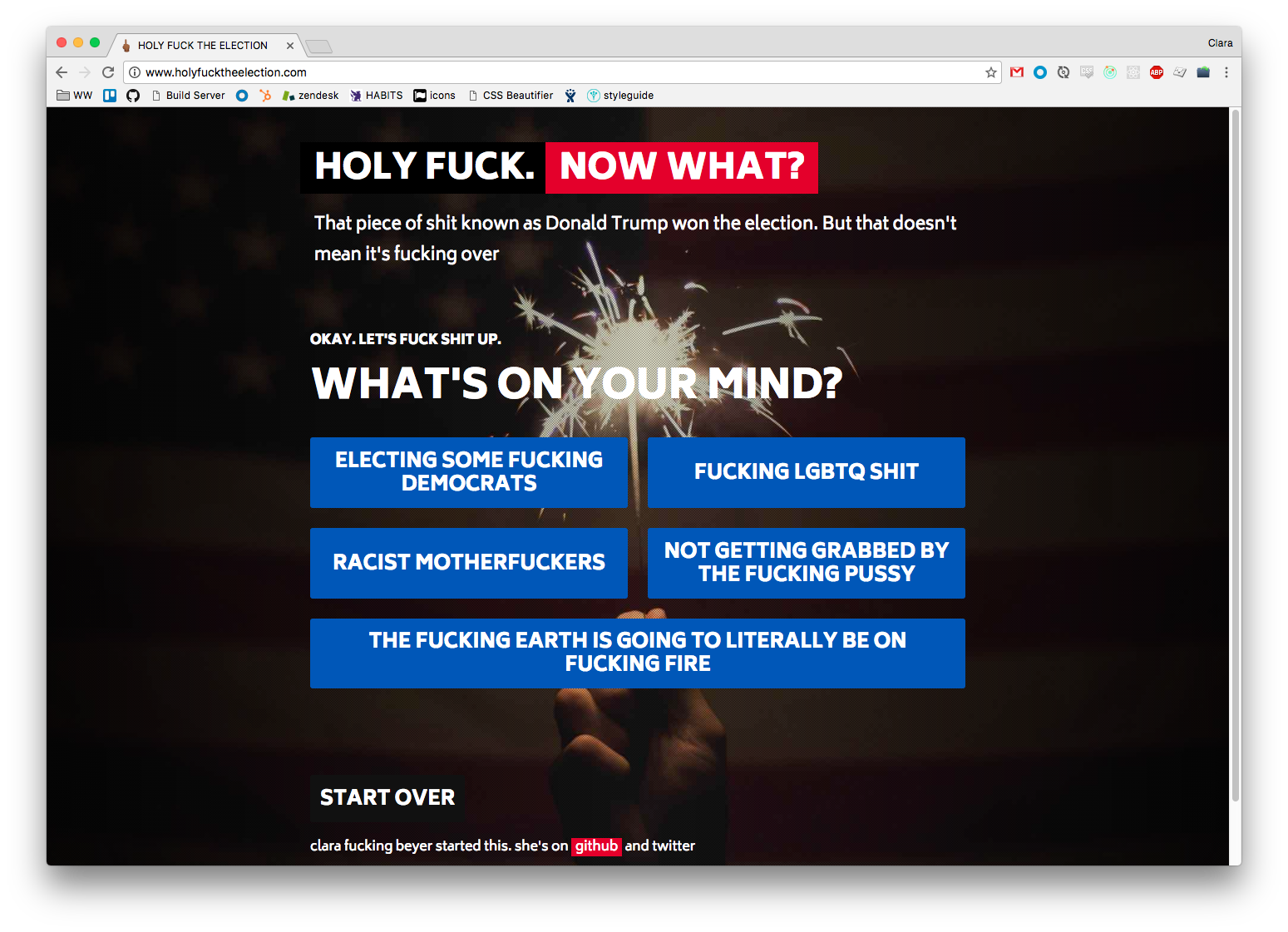 The internet on November 10th was ready to fuck shit up. This thing spread like crazy among similarly depressed liberals desperate for the feeling that literally anything we could do would somehow make this better. I asked for pull requests to add more organizations, and people went way above and beyond. (It turns out, the internet knows a lot about social justice and a lot about front end development tools. Who knew?)

Looking at analytics for @ClimSciDefense A lot of traffic to donate page from https://t.co/hJmu0QerHo Thanks @clarabellum for including us

@clarabellum @ClimSciDefense They did. Can't tell exactly how many but based on the navigation patterns, a lot did donate.